Canadian home sales up from November to December 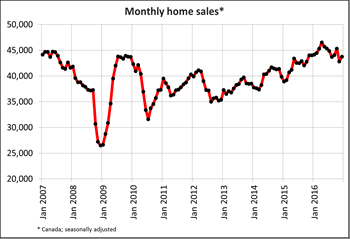 Ottawa, ON, January 16, 2017 – According to statistics released today by The Canadian Real Estate Association (CREA), national home sales were up on a month-over-month basis in December 2016.

The number of homes trading hands via Canadian MLS® Systems rose 2.2 % month-over-month in December 2016. The rebound recovered less than half of the drop in activity from October to November, when it posted the biggest monthly retreat in more than four years after tightened mortgage regulations came into effect.

Activity was up on a month-over-month basis in about 60% of all local markets, led by Calgary and Edmonton where sales rallied following large declines in November.

Actual (not seasonally adjusted) sales activity was down 5.0% in December from a year ago, when it reached the highest level ever for the month. The number of homes changing hands in 2016 was up by 6.3% annually, reflecting strong sales activity in the first half of the year that has softened since.

“Sales set a new annual record last year,” said CREA President Cliff Iverson. “However, tightened mortgage regulations are expected to contribute to lower sales activity this year, though the extent to which they will weigh on housing markets across Canada will vary. All real estate is local, and REALTORS® remain your best source for information about sales and listings where you live or might like to in the future.”

“Home sales are unlikely to benefit the Canadian economy as much in 2017 as they did in 2016,” said Gregory Klump, CREA’s Chief Economist. “New regulations mean that in order to qualify for a mortgage, home buyers will either have to save longer for a bigger down payment or purchase a lower priced home. In urban centres where the latter are in short supply, that’s likely to translate into fewer sales.”

The number of newly listed homes fell 3.0% in December 2016 compared to November. New listings were down in about 60% of all local markets, with sizeable declines in B.C.’s Lower Mainland, Calgary and the Greater Toronto Area (GTA).

With sales up and new listings down, the national sales-to-new listings ratio rose to 63.5% in December compared to 60.3% in November.

A sales-to-new listings ratio between 40% and 60% is generally consistent with balanced housing market conditions, with readings below and above this range indicating buyers’ and sellers’ markets respectively.

The ratio was above 60% in more than half of all local housing markets in December, the vast majority of which are located in British Columbia, in and around the GTA and across Southwestern Ontario.

The number of months of inventory is another important measure of the balance between housing supply and demand. It represents how long it would take to completely liquidate current inventories at the current rate of sales activity.

There were 4.6 months of inventory on a national basis at the end of December 2016 – down from 4.8 months in November.

The tight balance between housing supply and demand in Ontario’s Greater Golden Horseshoe region is without precedent (the region includes the GTA, Hamilton-Burlington, Oakville-Milton, Guelph, Kitchener-Waterloo, Cambridge, Brantford, the Niagara Region, Barrie and nearby cottage country). The number of months of inventory in December ranged between one and two months in many of these housing markets, and stood below one month in the Durham Region, Orangeville, Oakville-Milton, Kitchener-Waterloo, Brantford and Cambridge. 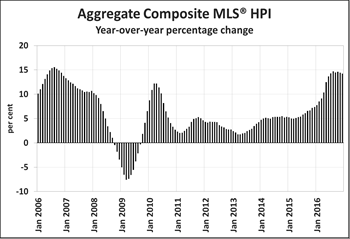 The Aggregate Composite MLS® HPI rose by 14.2% y-o-y in December 2016. The increase has diminished in recent months (14.4% y-o-y in November; 14.6% y-o-y in October) due to softening price trends for single family homes in B.C.’s Lower Mainland.

While benchmark home prices were up from year-ago levels in 9 of 11 housing markets tracked by the MLS® HPI, trends continued to vary widely by location.

In the Fraser Valley and Greater Vancouver, prices continued to recede from their peaks reached in August 2016 but remained above year-ago levels (+27.0% y-o-y and +17.8% y-o-y respectively). Meanwhile, benchmark prices climbed to new heights in Victoria and elsewhere on Vancouver Island, and in the GTA.

By comparison, home prices were down 3.7% y-o-y in Calgary and edged lower by 1.6% y-o-y in Saskatoon, continuing their retreat from peaks reached in 2015.

Home prices were up modestly from year-ago levels in Regina (+5.2%), Ottawa (+4.0%), Greater Montreal (+3.3%) and Greater Moncton (+1.9%). Monthly trends suggest that prices have begun to stabilize in all of these markets except Greater Montreal, where values continue to rise modestly.

The actual (not seasonally adjusted) national average price for homes sold in December 2016 was $470,661, up 3.5% from where it stood one year earlier. This marks the smallest y-o-y increase in nearly two years.

The national average price continues to be pulled upward by sales activity in Greater Vancouver and the GTA, which remain two of Canada’s tightest, most active and expensive housing markets.

The Canadian Real Estate Association (CREA) is one of Canada’s largest single-industry trade associations, representing more than 115,000 REALTORS® working through some 90 real estate Boards and Associations.